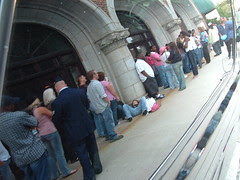 I don't normally like to plug the things I help put on the air, but in this case I'm making an exception. On Tuesday January 24th, American Idol: the Greensboro Audition will air on FOX. Readers of this blog may remember my coverage of the A.I. machine's visit back in September. Since then, I've spent w-a-y too much time stuck in an edit bay with the resulting footage from those five days, culling reports that will air locally over the next several days. Thus, I'm eager to see what the big boys did with their network fare. This much I do know: the Idol executive producers and celebrity judges did nothing but rave about the Gate City from the moment they exited their limos. Some of that I'll chalk up to flattery, but they must have meant it - as the Greensboro show weighs in at a full two hours. 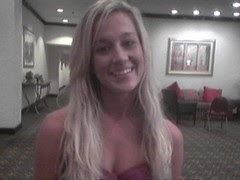 Now, I'm not here to champion the merits of the globe's silliest talent show and I dan sure don't want to make this an American Idol blog (even though it does send my site meter through the roof). However, A.I. is a part of my gig and I'd be less than an honest blogger if I refrained from mentioning it. So, it is with professional pride and just a little bit of indigestion that I donate a small amount of space to my involvement in this bastion of indignity - especially since I may soon enter a pressurized tube to witness the ensuing drama up close and personal like. Besides, the unwashed masses that showed up for the Greensboro auditions brought it all: talent, delusion and enough body glitter to choke a transvestite. What could be more fun to blog about than that? Don't answer, just tune in Tuesday night for an episode of American Idol with a southern twist. If nothing else, tune in for Kellie Pickler, a young lady with a great voice (and even better backstory), who smiled for my phone-cam mere minutes after wowing Randy, Paula and that dude in the muscle shirt.
Posted by Lenslinger at 9:10 PM

So tell us about the backstory and your site meter should really roll. ;-)

So... we got this girls digits right, cause I'm definitely gonna need to call her? WOW

I thought you wrote backside for a second there.

Seriously, she was fantastic last night.

Yes, she was fantastic, and yes, they did rave about Greensboro. The judges seemed to be a better mood than usual even with a lot of the awful auditions. A lot of the show was pretty embarrassing, not that I really care, it being AI and all. But that gal had a great story and a great voice. The one other female, the younger African American teenager who had been to 42 or however many foster homes, that girl's voice almost gave me goosebumps. She was outstanding, and alos had a great story.

Anybody know if they'll rerun it? I missed most of it.