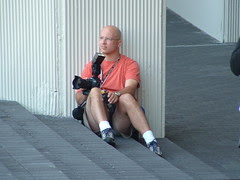 I don't know Jerry Wolford well, but I see him alot. Usually it's out of the corner of my eye while I'm stalking someone through the glass; my preternatural photog senses will tingle and I'll look up to see Jerry moving in slow and deadly with his lenses of his own. Rarely do our eyes meet but when they do, it's like two apex predators silently acknowledging each other from across the jungle floor. It's not that print photographers and TV shooters are natural enemies. If anything, we're two breeds of the same species, distant cousins with different stripes, but the same keen sight.

Trouble is, Jerry's one dangerous cat. I know this because I see his marksmanship in my driveway every morning, jaw-dropping images that make me scratch my bedhead and wonder how me bagged that shot. You know, the one he obviously popped off while standing within feet of me the day before...Part of it I'll chalk to up to our differing formats. While I specialize in moving pictures, Jerry and his ilk produce pictures that move. My motion and sound can titillate and sway, but nothing resonates like a frozen image. And never has that been on better display than with The News and Record's latest multimedia endeavor, Pirates' Tale: The Story of Page's Football Season. Expertly edited to a natural soundtrack, this collection of stills presents one high school's football program in a way that is downright cinematic.

It's no secret newspaper circulation is waning. Forward-thinking publications like the N&R are smart to delve into high quality multi-media, even if their broadcast brethren do scoff it off as an act of desperation. Not me. I look forward to the day when the box I get my news from offers the immediacy of video, the analysis of print and the depth of the internet. Until then, I'll keep a close eye on what Jerry's bosses are up to and hope that my own industry will recognize this progression in news delivery for what it truly is: natural evolution.
Posted by Lenslinger at 7:18 PM

Jerry IS a genius with images. I call myself lucky to be able to work with him.

He's also a Mac genius. I could sit and talk with him for hours, of course, we wouldn't get any work done. We both have a passion for this brave new world of multimedia.

Now, I'm sure our broadcast brethren do scoff at print efforts, but the good ol' days when the two mediums never crossed paths are going away. It's already happening across the country in places you'd never expect.

Oh, and speaking of good shooters, our good friends Cindy and Rick cover the still and moving image spectrum. Dang, I wish they were here.

I second what Herb said. Reporters and photographers often have, well, difficult relationships, but Jerry made me a fan very soon after joining the N&R when we were both covering something -- shooting, fire, whatever -- and in addition to getting his images, he also was politely but firmly corraling every possible witness to the event to ensure that I either could talk to them or already had.

He has been a champion of everything we've tried to do online since we got into the Internet bidness lo, these 12 years ago.

Plus, he's just a genuinely nice guy to spend time around. (Comes in handy during police standoffs and so forth.)

There's an ongoing debate at Poynter.org about whether a reporter calling someone "my photographer" is disrespectful. For certain assignments, I've asked photo assignment editors for Jerry to be "my photographer," and both sides know it's intended with all the respect in the world.