Through a Lens, Darkly 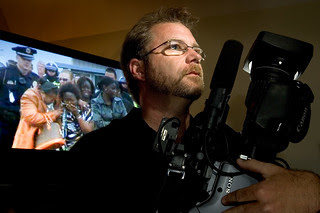 "Ya ever go to like, murders and stuff?, the high school senior asked. "Sure," I said, "but they’re never as interesting as they are on CSI." The line got a laugh and a groan, so I moved on to another subject. Later that night though, I realized just how much I’d lied to the curious teen.

It was well below zero the day I saw my first body. In fact, the cold was what killed the old man found in the woods that January morning. The scanner led me there - to a vacant lot behind a bank, where a cop buddy let me in close for an unauthorized glance. Camera by my side, I approached the prone figure on the forest floor. Knees bent as if sleeping, the old man in the brown coat and gray beard lay on his side. A wind-blown mound of dead winter leaves covered half his face - the one visible eye open and unfocused. As I bathed in his blank stare, a bank teller’s metallic voice wafted in the distance. Looking around, I noticed the stacked cardboard, the tied-off garbage bag, the worn laundry draped over scraggly pine saplings. Only then did I realize I was standing in the homeless man’s bedroom.

A year or two later, I already considered myself a veteran. With growing skills and too much swagger, I wandered from one random calamity to the next. One warm morning, I followed the voices on the law enforcer’s frequency to a rundown house at the bottom of a hill, where chance and circumstance had claimed another victim. At first glance, the primer-gray Nova sitting cockeyed on the porch was downright laughable, until a familiar officer dropped the F-Bomb. Fatal. Suddenly I noticed a cop unfolding a large white sheet. By the time he draped it over the front of the car, I had him in my camera’s crosshairs. The fleeting shot led the noon that day - the forty second tale of a freak accident involving a speeding Chevy and an unlucky resident -a well-regarded grandfather who liked to sit on his front porch in the morning, sip coffee and wave at the motorists he knew.

Not long after that, I found myself on the edge of another violent demise. An early morning delivery man had sounded the first claxon, dialing 9-1-1 moments after finding a 24 hour convenience store clerk congealing in a pool of his own blood. I joined a fellow photog at the fluttering crime tape and fired up my lens. Behind us, a bloated summer sun peeked over the trees, bathing the store front in warm morning light. The bright orange shafts pierced the windows and lit up the store’s interior, lighting up the scene like some tragic diorama. A heavy detective in a too-tight shirt held his flashlight high, pointing his own beam to the floor as a second detective stepped into frame and snapped a few shots with an oversized camera ‘Bingo’ I said softly, observing the cinematic moment. For several hours I felt good about that shot - until I interviewed the victim’s mother and zoomed in on the tears running down her face.

For months the veteran nurse had mailed letters to anyone who would read them, swearing her ex-husband was going to kill her. When he finally did, I was there. To be fair the unhappy couple were already dead by the time I rolled up to the hospital parking lot. At the time, I wasn’t sure exactly what had happened, only that a double shooting call over the scanner had interrupted my pork chop dinner. The cops were everywhere, their blue lights swirling amid the flash of red ambulance lamps. I panned my lens around a bit, trying to decide what to capture first. In the distance two cops stood over a covered body - the husband who’d followed his first murder with a last suicide attempt. Much closer to my tripod spot, a second sheet lay draped over a crumpled form. I rolled tape on both, before pointing my camera at a pair of woman’s blood-smeared eyeglasses. When I did, blue strobe lights danced in the scratched lenses of the broken frames. My heart raced, knowing the image would soon blanket the airwaves, leaving pain and outrage in its wake.

To say these victims haunt my thoughts would be an overstatement. In fact, I can’t even remember any of their names. But the visual touchstones that surrounded their deaths, the pictures that impacted a region and caused it to recoil, are still very much with me. Sometimes, in the pre-dawn hours of my suburban bedroom, these images splay out on the darkened wall, bringing to mind broadcasted tragedies past and causing me to wonder about the kind of karma I’m collecting.
Posted by Lenslinger at 10:43 PM

Good writing in this one. Not that you don't write well in all of them. But your discriptions of each scene here would please any creative writing teacher. I could see each scene through your words.

"...causing me to wonder about the kind of karma I’m collecting."
Well stated, Lenslinger. Seems to be a natural progression that the longer we're in this business, the more aware we become of how what we do affects not just us, but those around us as well.

Another great post, Lenslinger! Thank you for sharing your experiences. I think that by telling your stories, your karma is likely cleared, because you describe the horror with such dignity for the victims.

I think this may be the best of your best. It seems to me your life would make an deeply interesting network drama series... or at least a movie of the week. ;)

Levitra is another brother alternative of the ED drugs like Viagra and Cialis, as most of us must be knowing. The main feature of levitra about is that it has been proved to be harmless for people with minor heart problems. This is a category that most of the other ED drugs have failed in. The other ED drugs cannot be administered to people with heart troubles unlike Levitra. Hence slowly but steadily Levitra too, is gaining momentum in the popularity charts, mainly because of this advantage that it possesses.

yes or no Viagra

There are many online pharmacies were you can find

Viagra
online and prices will be much cheaper
, Generic Viagra more over you can always Viagra On the street, Viagrafor money to
Buy Viagra Online is the best.viagra no prescription

My how times have changed.

Hi! Thanks so much for taking the time to share your post; this posting has evoked the most response.

In this blog is very nice post.so great finance advise to them.