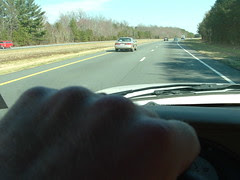 I was drifting off behind the wheel yesterday morning when the cell phone ripped me from my slow lane stupor.

”85, just shy of 109...” Now I was awake, hurtling down the interstate and late for a date with inconvenience. No longer drowsy with b-block feature fodder, I leaned into the wheel and pressed the accelerator, my marked news unit weaving a taut thread through the mean streets of Thomasville.

As I negotiated the gauntlet of stoplights and city buses, I thought about what lay before me. Covering the immediate minutes following a bank robbery was never easy. While the violated building wasn’t going anywhere, a growing contingency of law enforcers would no doubt be scrambling after the brain surgeons who’d staged the robbery in the first place. Since neither parties gave a damn about the TV cameras that inevitably joined the chase, it could be a bitch to cover.

But before I could cover this latest foot race fiasco, I had to get there. Doing my best to get through town without braking too many laws, I gunned the engines to close in on an old Caddy up ahead. As I did, three unmarked Crown Vics fell in behind me. Through the rearview mirror, I could see the jug-eared silhouette behind the lead car’s steering wheel. Studying the outline, I recognized the breed as small town detective - from the angry flat top haircut to the unfortunate clip-on tie holding everything intact. Wishing they were ahead of me instead of behind, I punched the gas to give them space….and almost slammed into the Cadillac in front of me.

The knuckles and blue hair gave her away, though both were barely visible above the Caddy’s front seat. Through her side view mirror I could see the stoic face of a family matriarch who was in no rush to get to the grocery store, or church, or quilting bee. Whatever her destination, she held three cars full of law enforcers and one grumpy news photog hostage as she poked along on the two lane road. In a scene reminiscent of the slow speed pursuit of O.J.’s white Bronco, we reached speeds of 34 miles an hour for an excruciatingly long ten minutes.

Mercifully, the road eventually turned four lane and I happily let the law-dogs behind me be the first to blow past Granny. Once they did, I followed and the rolling countryside outside my news unit’s window turned back into a bright green blur.

By the time I reached Hasty School Road, life had amped back up to spot-news speed. Up ahead, the unmarked units turned down different side streets, joining the roving fleet of squad cars that was combing over every inch of the rural stretch. The law was also on foot - everywhere I looked sheriff deputed were sprinting across yards, knocking in doors, interviewing farm wives. With a curse and a shrug I whipped into a gas station’s gravel lot and threw the Ford Explorer in park. Outside the news unit, two women in NASCAR t-shirts watched slack-jaw from the store’s doorway as a Dukes of Hazzard episode unfolded before them.

“Hey ladies,“ I said as I pulled my tripod and camera from beneath the tailgate. “Where day at?”

The one in the Intimidator shirt unfolded her beefy arms, revealing an old, oversized cell phone and lots of jiggly arm-flesh,

“All da law’s headin down thar…”

I followed the direction of the woman’s outstretched hand and saw more blue twinkling in the distance. Instinctively, I leveled my lens and hit the Record button. Through my viewfinder I could see police cars pouring into a subdivision. Zooming out, I followed the sound of a thunderous engine and caught a perfect frame of a tinted-window Crown Vic thundering past me.

“Scanner’s saying they caught one of them! Back in some neighborhood…” I was back behind the wheel, the cell phone jammed in my ear and barking instructions.

“Left on Century, Right on Peacock, then it should dead-end.” I could hear my assignment editor’s map book rustling in the background. But by that time I had to drop the phone to grab the steering wheel, whereupon I quickly parked my news unit in a cockeyed driveway. Leaping out of my ride, I grabbed the camera and ran toward the cluster of cops cars and uniformed officers down the block.

I was halfway there when the police cars began pulling out. Skidding to a stop I shouldered my camera and brought the first black and white into view. Half out of breath, I had to brace myself to steady the shot. Hitting the VTR button with my thumb, I followed the approaching cars on a tiny screen an inch from my eye. The first zoomed by in a huff of but several large men with walkie-talkies were holding the third one up.

With my sonar pinging, I kept the car in frame while I jogged toward it. When I did the deputies stepped back from the car and it began inching forward. I zoomed out and stepped closer. Through the car’s window and my lens I saw a handcuffed figure with sandy blonde hair trying to become one with the floorboard. I smiled inside, glad to have bagged my quarry. But just as the suspect’s image embedded itself onto my disc, the deputy driver hit the gas and my video trophy shot out of sight.

Police radios cracked in the distance as I stood there, breathing heavy and reviewing the shots in my mind. Quite certain my footage would consist of no more than thirty seconds on-air, I caught my breath and tried not to think about the appointments I was now late for. Still, as I trudged back to my idling SUV, I quietly savored the flavor of a job that still occasionally gets my pulse going.

Of course that was all forgotten two hours later when I found myself stuck at a press conference, half-listening to the German CEO of a Chemical plant prattle on in heavy-accented deadpan about how excited he was to be coming to the Piedmont. There’s a clock stopper for ya.
Posted by Lenslinger at 8:15 AM

You were smiling inside because you had a story to blog about that night. Good writing boss.

Thanks for sharing the most exciting bank robbery story I've heard in a while..

Nothing better than bagging your quarry..

Though I still get angry and jealous ever time you mention your XD. :(

Be careful though. The way you describe the NASCAR ladies and their accents, your making NC seem exactly like I figure it would be! :)

At any rate, this is why you're the coolest photog evar!

Do you think it's time they stopped calling it the 'VTR' button? 'VDR'? 'VR'? Some things never change...

Great story.
And yeah, I'm jealous of the XD, as well.

Another good adventure! By the way, have you ever noticed how the words "uniformed" and "uninformed" can replace each other fairly easily in one's mind's eye???

Keep up the good work, I will be back to check on your new updates. Incredible job! I have a blog/website that
might interest you