A Photog Looks at Forty 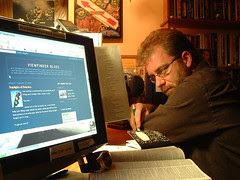 Spend just one year chasing news and you’ll quickly start repeating yourself. Winter storms, Spring training, Summer camps and Fall Festivals, all punctuated by a steady barrage of crime and grime. I’ve spent the past fifteen years running circles around this slow lurching parade, doubling back and stealing glances while trying not to get run over or step in too much horseshit. It’s a ludicrous way to make a living, but it’s the one I’ve chosen.

Or maybe it chose me. After following my lack of ambition around for a bit, I wandered into my first TV station at age 22. Imagine my shock at all the inmates running the asylum. Character straight out of vaudeville sat in corner offices, puffed-up anchors arm-wrestled for face time and zonked out production types regularly fell asleep at the wheel. Suddenly, I was home! Looking around at the twenty year old technology, blustery egos and simmering incompetence, it occurred to me I’d found my special purpose.

So I dove in headfirst, soaking up everything there was to know about backwaters television. I started each morning slow-dancing with a studio camera as ladies with blue hair hawked homemade potholders. I learned to run audio for the noon news and tried not to doze off during weather. After lunch, I’d hold up in a musty edit booth, watching wizened masters craft polished spots out of sticks and scrap metal. Along the way, I traded notes, jokes and a few unmentionables with the pirates, freaks and madmen that made up the station ranks. Staffers a few years older told us we were attending the Roy Park School of Broadcasting - a half slam against our affiliate’s miserly owner. How right they were. The steakhouse coupon I got for being Employee of the Month turned out to be the only sheepskin I've ever received.

But a funny thing happened on the way to becoming the World’s most well-read studio tech. I saw...THEM. Swaggering through the tape room like dusty gunslingers, the station’s news photographers ambled past with their cameras hung low and dirty. I couldn’t look away. With their streamlined gear, digital pagers and seen-it-all stare, they bled the kind of street cred I‘d been faking all these years. As they passed by my darkened post on their way back to their waiting news steeds, I sunk further in the tape room’s shadows and swore to myself I’d one day join their ranks.

And so I did, but not the way I‘d envisioned. It took a fake handgun and a twist of fate to draft me into service, but once I became indoctrinated, I never looked back. How could I? I was too busy learning the ways of The Force, sharpening my camera skills and editing acumen until I could slay the scariest of deadlines. Looking back, it all seems quite silly, but at the time, it was a heady rush of newsgathering truths, a period of time in which great mysteries dissolved into well-worn tips and tricks behind the lens. Before long, I was blowing through the station with considerable swagger of my own, convinced I’d already seen it all because I’d attended a half dozen press conferences.

That was a decade and a half ago, though it feels even longer. In that time a lot has changed. I’m a father now, one who places a higher value on getting home on time than scoring that elusive exclusive. I don’t knock over old ladies to get to house fires anymore, I don’t jump curbs to attend ribbon cuttings. More significantly, I don’t high five co-workers over tears captured on tape, I don’t roll up on children in peril without swallowing hard and thinking of my own beautiful girls at home.

No, the joys and pitfalls of the evening news aren’t quite as intoxicating as they used to be. What rendered me spellbound as a 24 year old news punk with an attitude now barely holds the attention of this 38 year old taxpayer with a mortgage. I suppose that’s only normal, but as I spend day after day peering into the same old viewfinder, I find myself wondering how much longer I can keep it all in focus.

Now if you’ll excuse me, there’s a groundbreaking I have to get to.
Posted by Lenslinger at 10:34 PM

ahh but Lenslinger -- even if being a camera jockey no longer intoxicates you or leaves you spellbound -- your accounts of the life have that effect on us. So you can't quit. You're a lifer. Now pick up that camera and go find something fun and meaningful for us to read tomorrow night. :)

Good writing sends a chill through me.
I just went to grab a sweater.

As eloquent a piece as I've ever read on the joys and perils of doing time in the joint...I mean newsroom.