From Crisis to Commodity

I’m pretty adept at avoiding lead stories. But every so often forces outside my control drag me kicking and screaming back to the front lines of the newsgathering war. Today was one of those days. Before I could even get to work, the pager on my belt began convulsing, letting me know I’d better skip the drive-thru window and report to my TV station ASAP. Rolling my eyes, I dialed my cell phone and submitted to my fate. 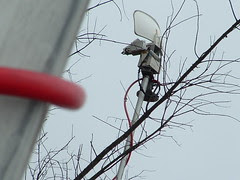 It all started when some thug in East Greensboro stole a Mitsubishi from a convenience store parking lot. The owner of the car had left it idling while she went inside to pay for gas. When she realized it was gone, all she could think about was her two year old son in the backseat. As she began to rightfully freak out, the Spot News Circus began. City police turned out in droves, their scanners percolated and overflowed with tantalizing details and assignment editors started to hyperventilate. Before long, I was behind the wheel of a wheezed-out Live truck, passing traffic and cursing under my breath as my reporter for the day scribbled details of the carjack turned kidnapping. 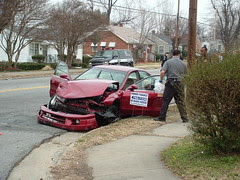 It was all over by the time we arrived. Cops had spotted the stolen car and chased it through less than stellar neighborhoods. After a respectable pursuit, the car thief crashed his purloined vehicle into a passing SUV, causing quite the dust-up off Market street. In the immediate moments following impact, the bad guy somehow managed to escape on foot, leaving the unharmed toddler safe in his car seat. Classy! But though the action was over, my job had just begun. Parking my logo’d stagecoach near the crunched up Mitsubishi, I raised the mast and began processing tape my fellow staffers had shot on scene. My photog brethren had done their jobs well. Shots of the wrecked car, search dogs, and an interview with a much-relieved mother told me I’d have plenty of images to tell the story. Good thing, since every newscast producer I knew was now clamoring for a piece of the action. As each individual show-stacker rang my cell phone, I leaned in to the editor and mused about the news. 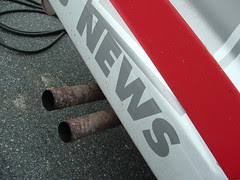 When I was new to the business, there was nothing I enjoyed more than breaking news. But after years of covering murders, drive-bys and armed robberies, I found myself monumentally bored with televising the daily carnage. So I began to specialize in features. You know - those inconsequential stories that wrap up the newscast, the ones that give the anchor team something to chortle about as the houselights fade. Call them frivolous, but were it not for the warm and fuzzy feature piece, I would have found another way to make a living a long time ago. It’s not something I think about a lot, until I’m stuck on the roadside, getting dizzy off Live Truck fumes and wondering how normal people spend their workday. 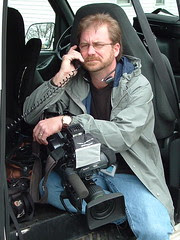 But there wasn’t alot of time for critical thinking. I had far too much tape to cut. Between our many Live(!) shots, I sliced and diced the footage into every form and shape possible. Full blown reports, quickly-paced summaries and a bevy of teases poured forth from my fingertips. Before I knew it, I’d helped process this fleeting crisis into a daylong newsroom commodity. In the big picture, a twenty minute kidnap joyride doesn’t really amount to much, but for a TV station in the thralls of a Ratings period, it is televised gold. Given just a nugget of on-air emotion from the relieved mother holding her son, we stretched it across a full day of news programming, spicing up our many newscast with the tersely worded tale of “A Mother’s Worst Nightmare“! Okay, maybe we didn’t dust off that old cliché (we’re saving it for the next school bus wreck), but we did showcase the drama in a way that only TV can - in full living color with sound, immediacy and a few bromides to boot.

Is that so wrong?
Posted by Lenslinger at 7:35 AM

Variety has always been my greatest pleasure in shooting news, but I can understand your feeling.
For me, the breaking story is like junk food. I can swear off for a while, but eventually I'll come back and enjoy a nice juicy pursuit with a side of footbail and sometimes a helping of police beating for dessert.

I am looking for ideas to start my own blog about ebooks and you have give me a few ideas. Thank you. Good blog. I will check it each week.