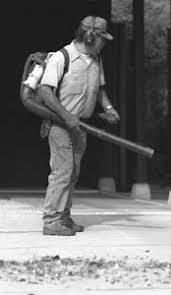 My Monday started on the steps of the County Courthouse, making small talk with familiar faces while complete strangers set up microphones and a podium. The topic at hand: a last minute clemency plea from supporters of a death row inmate. The awaiting media crush consisted of three: myself, another TV photog whose name I've never known (even though we've loitered for hours outside various scenes of tragedy together), and a newspaper photographer with the poetic moniker of H. Scott Hoffman.

Together we stood under the morning sun, commenting as lensmen will that the light is never quite right. A passing homicide detective I haven't seen in years stopped by to chat, telling me he had a new baby and asking me if I remembered that long summer afternoon in the barrio. But before I could answer, Daryl Hunt walked by and I had to get to work.

Not quite a year ago, the state of North Carolina released inmate Daryl Hunt after DNA evidence pointed to another suspect in the murder of a Winston-Salem woman. Hunt walked, but not before serving 18 years of a life sentence. Today he stood on the edge of the small crowd, his trademark skull cap and blissful glint giving him away, Within seconds my colleague and I swooped in, attaching lapel microphones and rolling tape on the affable exoneree.

Ten questions and eight answers later, Hunt melted back into the crowd and the promised rally began. I'm not sure what it says under 'rally' in the dictionary, but if there's a picture of a half dozen senior citizens staring into space while a portly legal wonk mumbles into an badly-overmodulated microphone, then yes Virginia, this was a 'rally'.

Behind the viewfinder, I rolled my eyes and watched the 'Record' light glow. On stage, the morning sun threw harsh shadows on the speaker's back, through my expensive lens, he was nothing more than a pudgy black silhouette. I wrestled with my iris and wondered for the millionth time who, if anyone, coordinates these events.

No one apparently, because the cheesy karaoke microphone sounded like just that, making the quickly-aging crowd to lean in a little and tap their earpieces. Those who turned up their hearing aids quickly regretted it, as a city worker's unbridled leaf blower soon drowned out any hope of public discourse. Thus, the deperate pleas of a death row inmate's family were swallowed up by the sounds of city sidewalk maintenance.

I love a good rally.
Posted by Lenslinger at 8:07 PM