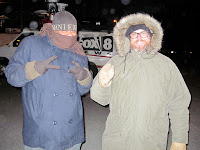 Like you, I’ve been cracking out on the Winter Olympics and while I’ve thrilled at the sight of young athletes pushing themselves to the extreme, I can’t help but wonder what the games would look like if they let MY PEOPLE compete…


Laptop Luge - Photog straps self onto a rickety contraption made of old TV antennas, clenches wi-fi hotspot thingie between teeth and slides down an icy embankment while editing a minute-fifteen news story on an outdated laptop. Points scored only if news story successfully uploaded by time of inevitable crash. Story coherence of no concern. Extra points awarded if antenna-sled deemed reusable.


Squirreling - Doubles event in which two TV News photographers scramble across semi-frozen pond while sliding 70's era camera batteries back and forth to each other. Photogs must do so while cradling cell phone between ear and shoulder as disembodied voice quizzes them on their progress. Points deducted for overt swearing. First photog to reach shore with most batteries wins. Any medals earned will be presented to anchors back at the station.


News Crew Quadrathlon - Team event in which reporter and photographer are dispatched to four separate counties in a badly-neglected live truck. News Crew must produce two separate stories on two separate subjects and go live(!) a minimum of four times. Crew not allowed to consume heated food during entirety of event and must complete the course at least an hour and a half from starting point... Wait, that's no Olympic Event… that was Tuesday!
Posted by Lenslinger at 9:22 AM

Newscrew must search across five counties driving nearly 400 miles in search of non-existent stores which live only in the mind of the deranged assignment desk. Points awarded for everything from VO to PKG they manage to slide past the desk to the five producer. Bonus points if late show carries too.

After comprehensive and final coverage of a story the crew are rewarded for a job well done by being told to do it exactly the same the next day. Usually followed by a conversation where the crew learn the person assigning the story didn't watch yesterdays and just heard it was good so do it again no matter how stupid an idea that is.

I think it's cute you think a light is involved!