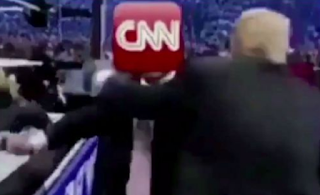 As a longstanding member of the broadcast media, I’ve been heckled, threatened, shoved and spat at by people who didn’t like the coverage I was providing.  I’ve always tried to chuckle and dodge, knowing that undue animosity was the price I paid for thrusting my lens this way and that.

Once, the elderly matriarch of a trailer park crack-house crew hocked a loogie my way that - I swear to you - flew in slow-motion. It hung there in the air, roiling with venom and denture juice as I leaned back all Matrix-like to avoid it. It was a memoir-worthy moment; one I’ve come to treasure long after her spittle dried in the dirt. I just wish I could still bend like that.

Many Halloweens ago, I rode shotgun with a cocky young deputy who loved the way my camera looked at him. Late in the evening, we pulled up to the scene of a reported stabbing. Before I could unbuckle my seatbelt, Officer Starstruck jumped out, drew his weapon and ran around the corner of an apartment building. I was in my 20’s, so of course I followed him, only to quickly learn I wasn’t invited to the drunken rugby player kegger knife fight. My cop buddy intervened before I got too bounced around, but not before my eyeglasses got shoved down my shirt. Those frames never did fit right after that.

And then there was last summer, in which I spent a fun filled week walking backwards in front of an angry mob. The city of Charlotte damn near came undone over the shooting of Keith Scott and the memories of that meltdown won’t go quietly either. There are places in the city I still cannot go without triggering instant recall of broken glass, tortured shrieks, revving engines, barking bullhorns, angry rain, torn shoulders and the sickly sweet stench of tear gas in the air. What I witnessed that week is something I never want to see again. But I wasn’t there by choice. I was there by vocation: a lowly ignoble craft that’s increasingly regarded as … fake.

Now, I awake one splendid Sunday morning to find the elected leader of the free world striking out against my broadcasting brethren with, of all things, a doctored wrestling video. It’s the kind of scenario that young dude who dodged the Granny spit simply never would have believed. And it’s enough to make this career cameraman worry about what’s to come…
Posted by Lenslinger at 3:12 PM 1 comment: