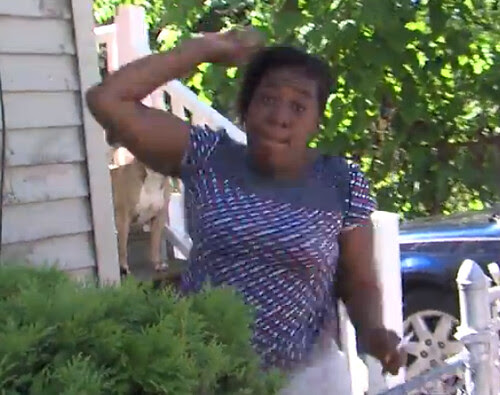 Just when we thought we'd seen every form of miscreant take on The Fourth Estate, a Rhode Island homemaker goes all inter-species on an undeserving news crew. It happened in Providence, Rhode Island, when an ABC6 news crew asked a grumpy mother just what she thought about her daughter's alleged attacker turning himself into authorities. But 35 year old Melissa Lawrence wasn't in the mood for questions. She was, however, more than happy to cast the first (and last) stone. God only knows what was going through photog Marc Jackson's head as the crazy bitch in his viewfinder drew back and hurled a rock at him. It missed his head but grazed his elbow. Lesser men may have flinched, kicked, or loudly vowed to smite every living descendant of said rock-lobber. Me, I'd have gone all Samuel L. on the lady, informing her in stentorian tones that I would strike down upon thee with SER-I-OUS VENGEANCE! (if not a restraining order). But who has time to quote Pulp Fiction when the hector in question breaks out the baseball bat? Not me. I'd have been down the road l-o-o-ng before charm school dropout Melissa Lawrence opted to let the dogs out. (What ever happened to "No Comment"?) Before Jackson or reporter Abbey Niezgoda could fully process what was happening, the reluctant interview subject whispered something satanic to two scary-ass Pit Bulls. What followed wasn't pretty. The two growling curs nip at the young reporter's heels. One even bites her arm, eliciting cries of pain and forcing Niezgoda to drop the mic and exit stage right. She was able to escape further attack, but will no doubt carry scars she'll have to ignore the next time some news manager orders to knock on another dodgy door. 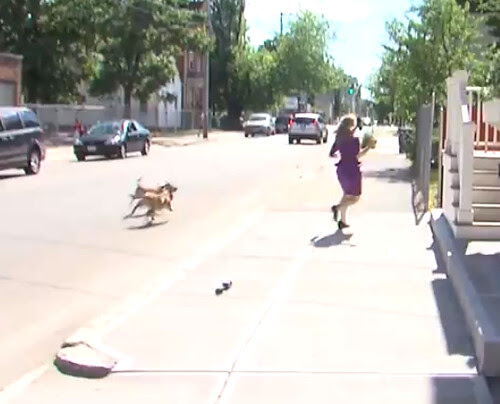 Ya know, just because a news crew punched your address into their GPS, it doesn't mean you have to give them an interview. You can turn them down, ignore them altogether, even flip the predictable bird. What you CANNOT do is launch projectiles, sic devil dogs or throw burning oil on the underpaid interlopers. It seems simple, really. An uninvited member of the media has no right to trespass on you property. They can, however, loiter on a public street and ask you rude questions. You don't have to answer them, but neither do you have to lose your ever-lasting mind and openly assault a person whose primary objective in life is to visually record any and every thing that hoves into view. Should we reslly still be covering this? I think not, but with attacks ratcheting up seemingly every month, it's only a matter of time before the first documented zombie attacks goes down live one night, as some hollow-eyed corpse takes a chunk out of Wendy Miniskirt's skull in the reassuring glow of the Breaking News banner. Maybe we'll get lucky and it'll happen during sweeps.

PS) Authorities have charged Melissa Lawrence with two counts of felony assault, effectively ending her campaign to land 'Miss Congeniality' in the upcoming Miss providence beauty pageant. Maybe for the talent section she could set fire to an orphanage? Just a thought... Schmucks!