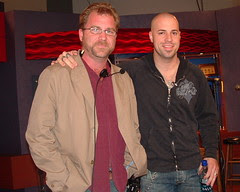 Before I left to rendezvous with the hillbilly, a smoldering bald rocker rolled through the station's double door. Enter Chris Daughtry - sans entourage, just him in a hoodie. I was waiting for him in the lobby with a camera on my shoulder, a stiff yellow cable in tow. I backpedaled as Chris strode down the hall toward the green room, and he cut me a questioning look. 'We're On The Air' I stage whispered, even though there was no audio being transmitted from my camera. Chris eyes widened and he nodded. I then wanted to blink some kind of morse-code message at him, warn him that a building full of seasoned local TV pros were giggling with anticipation and wanted nothing more than to swoop down upon him with hearty back-slaps and enthusiastic high fives. Instead, I backed into a lightstand and almost made the angst-filled vocalist shoot bottled water out of his nose. There's never a shortage of humiliation when you're a shooter.

Later I tried to redeem myself, shooting handheld footage as Chris and his band tore through a stripped down version of his upcoming single, "It's Not Over". Truthbetold, we weren't expecting the band. When the young hipster musicians began showing up we scrambled for microphones and stools as the second hand ticked toward showtime. When the stoked and steady hand of the morning director took our shot, the edges of the studio were filled with curious coworkers. When Chris' last turbo-note faded, applause broke out and I unplugged my camera. Outside, Unit 4 sat trip-laden and late for the road. I meant to say later to the local boy gone global, but giddy cohorts enveloped him in a sea of adulation. To his credit, he stuck it out, posing for pictures, taking calls and from the looks of this photo, fullfilling his longheld ambition of doing mid-morning weather.

I guess dreams really do come true...
Posted by Lenslinger at 4:07 PM

Awesome! He's looking great as always. I am so glad his dream is coming true.